Every business day at 11 AM Greenwich Mean Time the British Bankers Association (BBA) establishes the London Interbank Offered Rates (LIBOR). These rates are calculated based on dozens of interest estimates presented by leading banks from around the world. This daily benchmark rate is actually a series of ten daily rates, each specific to the maturity term of a LIBOR-indexed loan. For example, a loan that is to be paid back over a one year term may have a slightly different rate than one that is expected to be repaid over a month.

Rates are calculated in 15 different currencies and impact mortgages, student and other loans, savings accounts, and a host of other financial products all over the world. More than $320 trillion dollars in financial products are indexed to these rates, according to the New York Times.

Since their inception in 1986 LIBOR rates have been as high as 11.06 percent, in March, 1989, and as low as .184 percent, in August, 2013. When you hear or read that mortgage rates are at historic lows, this is why. LIBOR rates factor heavily into the day to day rates you see at your local bank for mortgages, student or other loans, or even credit cards. They also help to determine whether you will pay more or less each month for your adjustable rate mortgage. 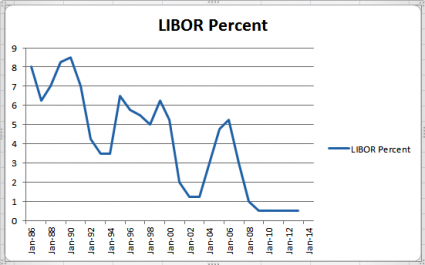 The 80's were a time of runaway inflation and LIBOR rates were high, ranging between 5.75 and 11 percent. In the same decade the Prime Rate, which is the interest rate banks charge their most credit-worthy customer, was also high, ranging between 7.5 and 13. Even fixed mortgage rates soared above 18 percent during the decade.

In part, the rates were so high because of government intervention aimed at slowing spending and bringing down inflation.

During the 90's, LIBOR rates decreased sharply and then rose again to remain fairly stable, hovering around six percent for the remainder of the decade. Peaks and valleys, however, yielded a low of 3.12 percent and a high of 7.75 percent. Meanwhile the Prime Rate experienced a range between six and 11 percent. Fixed mortgage rates ranged between seven and ten percent.

The new millennium kicked off with LIBOR rates hovering around six percent, but by 2003 they hit their lowest point of the decade, slightly above one percent. They slowly increased to about 5.5 percent but had another sharp drop in 2008, to less than one half of one percent. The Prime Rate fluctuated between a high of 9.5 percent in 2000, and a low of 3.25 in 2008, and remained stable for the rest of the decade. Fixed mortgage rates dropped from approximately eight percent to about five percent during the decade.

It should also be noted that at least one bank has admitted submitting false estimates to the BBA between 2005 and 2007 to enhance its own standing. Investigations of other banks are ongoing. It's difficult to interpret the impact of this malfeasance.

The new decade began with LIBOR rates ranging between .22 and .84 percent. Since that time they have fluctuated only mildly, rarely peaking above one percent. Mortgage rates dropped to a low of 3.35 percent in 2012 and have risen slightly so far in 2013.

If only because they can't go much lower, the remainder of the decade is likely to usher in LIBOR higher rates. Here is what the experts predict:

What LIBOR Means to You

Part of the appeal of an adjustable rate mortgage is that your payments drop if interest rates decline. With LIBOR rates well under one percent, they really can't go much lower, and the only place for them to go is higher.

If you are considering a LIBOR-indexed adjustable rate mortgage for other reasons, look for one that caps interest rates at a certain level, and be aware that your payments may increase. To keep a watchful eye on LIBOR rates, visit the Wall Street Journal Market Data Center. Not only can you see the daily rate, but you can also search other dates to view historic data.